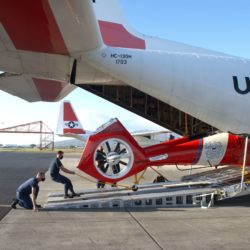 HONOLULU — A Coast Guard Air Station Barbers Point HC-130 Hercules aircrew conducted a medevac for a 57-year-old South Korean mariner from Palmyra Atoll, Thursday. The mariner was suffering abdominal pains and was flown to Hawaii where he was transferred by ambulance to Pali Momi Medical Center for treatment. He is reported to be in Leer másCoast Guard medevac mariner from Palmyra Atoll[…]