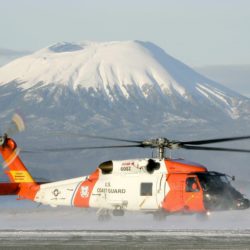 HAINES, Alaska​ —​ A Coast Guard MH-60 Jayhawk aircrew rescue a skier from backcountry near Haines, Alaska, Saturday after he was mauled by a bear. An MH-60 Jayhawk helicopter crew from Air Station Sitka hoisted the man who suffered injuries to his head and hands after being attacked on a mountain during a backcountry skiing outing. Leer másA Coast Guard MH-60 crew rescue an skier mauled by bear near Haines, Alaska[…]